Veevek
I am an extrovert and a leo - a super yet deadly combination!

It's September 5th and the past few weeks have been absolutely amazing! There have been moments of joy, frustration, guilt, and self revelations to name a few. I've many pictures and stories that I want to post but will do so when I return to Australia.

Well, this is the first time that I've been able to sit down with my thoughts (granted I'm at the airport) and to sit back and enjoy a surprisingly nice cappuccino from Starbucks. I'm making mental notes and trying to process some of the intense situations that have happened in the last little while.

I'm off to Copenhagen in about 1.5 hours and then will be travelling onwards to Helsinki.

For my 'family' in Australia, I really do miss you all. I wish that you could be here with me to celebrate and take part in the festivities that just passed. There will be lots of catch up and plenty of merry to be had when I return on September 13th. Alright, I'd best be off before my coffee gets cold.

A weekend to look forward towards...(post-edit)

Yes, the weekend has arrived here in Brisbane! The question is, why is this weekend any different? Well, there are so many things going on this weekend that I'm not really sure what end is up.

Okay for starters, I only had 3 hours of sleep last night. I can't remember the last time that I've had such little sleep because of doing uni work. My very good friend Anita and her sister and their cousin have arrived into Brisbane today (I'll be meeting them later this arvo) and will be spending the weekend with me. It will be a riot! I can't wait to show them around the romping grounds and to have them meet some of my friends here in Brisbane. I know that I've said this before - it's always nice to bring people from different spheres of your life and introduce (or collide) them with others. The consequences can be quite interesting (and I mean consequences both in the positive and negative outcomes).

It's now Sunday evening and what a weekend I've just had! Saturday was jam packed with friends, food, alcohol and great fun! Saturday morning I went to a birthing kit workshop where volunteers put together a small kit consisting of a large plastic sheet, scalpel blade, gauze, gloves, pieces of string, and soap. These kits are then sent to places like Ethiopia and Vietnam (where this batch of kits where going to) to provide a sterile environment for women to deliver. After that, my birthday celebrations were about to begin.

It was a bit odd considering that my birthday in not until the 22nd, I wanted to spend time and celebrate with my friends before leaving for Europe. The arvo was a picnic in New Farm Park along the river. It was awesome - a huge spread of food, including Anna's pig cake: 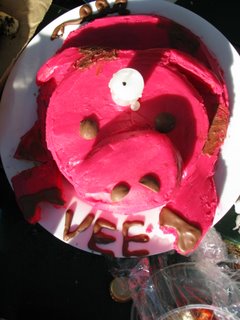 And this is Anna. 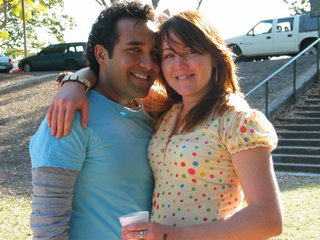 Most Australian children will have a cake like this at one point in their childhood (and adulthood for some of us). It was an afternoon of lying in the sun, playing hackysack (which I haven't done since Malta), playing with a very hyperactive puppy (courtesy of Kat and Ant), and having heaps of laughs with friends. We have also decided that you don't necessarily have to have an occasion to have a picnic in the park. Anita, Milan and Rohit quickly made friends at the picnic and it was a disappointment that they couldn't come out to the night festivities.

Here's a photo of Anita, myself and Milan. 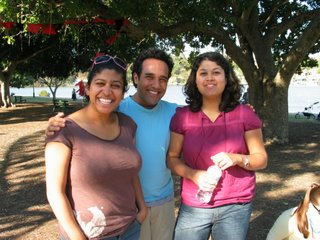 We went home for a couple of hours to get some sleep (which didn't happen) and change into something more appropriate for going out in the Valley. Also, Anita and crew were going to their relatives' house for the remainder of their stay in Brisbane. We chatted it up, had some more laughs (cooking, fukrudin, ape-man, and the hammock...how funny) before they had to leave. After they left, Dave and Suz presented me with presents. I always get a bit sheepish when that happens - I never expect gifts, as their friendship is more than enough. It seems a bit odd, but it always amazes me how you can meet people and that they can become so close and, in some cases, even more closer than family. They gave me a few things - a empty book with a quote on the front which read, "friends are the family we choose", a L'Occitane travel kit, and the original design of the caffettiera espresso, which looks like a teapot screwed on top of a base and you put that on the stove. It makes fantastic coffee!

Dave, Suz, Liam and I met up with some people at Bar Soma for drinks and tapas. After a few hours there, we all made our way to the Bowery (one of my favourite places in Brisbane), which is an older, classier place in the Valley. There were moments were I was quiet, not because I didn't have anything to say, but I was revelling in the fact that here are people that I truly do care for and all of them were having a great time. That feeling made my night. After the Bowery, I was ready to shake my groove thang...and some of us headed off to an Irish pub called Doolie's. Yes, I'm sure that most of you are thinking, "wha...an Irish pub to shake the said groove thang?!" Well, the pub has several levels and on the bottom level, there was a DJ that was spinning R&B/hiphop. Even though the music was alright, the place seemed to attract the dregs of people left in the Valley. Then we made our way to a the Royal George, by way of the Mustang (we were unable to get in because of our friends wasn't carrying their ID, even though he clearly looks over the age of 18 - think Jack Black). Brisbane has a 3am lockout, which means that if you aren't in an establishment by 3am, you'd better make your way home. So, everyone left to go home and I walked with a friend to her place and we talked for almost 2 hours. This friend was someone that I wasn't particular close to but we had a great time whenever we interacted. After last night, I know that they will a regular character in the Book of Veevek's Life. I got a taxi home (even though I could have walked home...but I just didn't feel walking 20 minutes and risk seeing the sun come up) and the taxi driver didn't charge me any cab fare. A great way to finish up the night. I came home and then instead of doing the normal thing and going straight to bed, I did some reading. Why? Well, why not. :) I finally hit the pillow at around 5:45am and then got up with a jolt when I heard Dave and Suz leave the house to buy some baking powder for pancakes, which was at 9am. It's almost 7:15pm and I'm absolutely buggered but the weekend was absolutely blissful.
Posted by Veevek at 10:45 No comments:

Yeah, viral infection. I reckon that that is what my computer has. My computer has been acting so strange for the past little while. In the beginning, all these adds for installing WinAntiVirus2006 were coming up. They eventually went away with the advent of a cocktail of anti-virus programmes. Now the Internet is acting all funny. In what way? Well, I'm not able to log on to MSN and affiliated Web sites, no personal Web sites (blogspot, etc) and I can't even log on to blogger.com! Things are really slow and it just makes this whole Internet business a pain in the ass more than anything.

So, that explains why I've not updated in a while. But here are some of the things that are going down....

1. I'm leaving for Europe in 12 days! My brother is getting married in Sweden. I can't to see him and J again (haven't him since end of 2004 and her since August of 2004)! It will also be nice to have all the members of my dad's side of the family present for such an occasion. The Thankey Clan will be meeting up once again - I can only imagine what sort of things will come to the surface. :) I'm also meeting up with some good friends in Paris and London (Elodie and Sara, respectively). There is something so revitalising about seeing friends in odd places. I'm also going to be going to Helsinki for the World Congress of the International Physicians for the Prevention of Nuclear War. As I wrote before, I can't wait! Needless to say, I've been working like a madman trying to get as much work done now before my departure. I know that I'm kidding myself when I say that I will be getting work done whilst overseas.

2. Anita is coming to Brisbane! My very good friend Anita from Calgary will be in Brisbane next week. There is something to be said about hosting friends, especially in a city that they've never been to. There will be heaps of photos and stories about the crazy stuff that we will undoubtedly get into. :)

3. I've booked another ticket overseas! Annabelle, Claire, Nabila and myself will be travelling to South East Asia after our final exams at the end of this year. All of us are so excited and it's nice to have something fun and adventurous to look forward to at the end of a uni year. We will be flying into Vientiane (capital of Laos) via Bangkok. Our tentative plan is to travel within Laos, then over to Vietnam, down the country and into Cambodia. We will be flying out of Bangkok - some of us are thinking of maybe even going to southern Thailand to soak up some beach and the like. We will be gone for 4 weeks (whilst other students in our year are going for much longer period of time, up to 8 weeks in fact) because both Nabila and I have our flights back to Canada on the 22nd. It will be cool.

Alright, I'm now heading out to Byron for the weekend. Yeah, I know...I should be doing work instead. However, I will be taking a textbook on clinical neurology...wish me luck.
Posted by Veevek at 12:30 No comments: